Put your Records on

I don't belive it! to save time on my usual blah blah I'll just copy paste the article.

NEW ORLEANS (Reuters) - The Walt Disney Co will introduce the first black animated heroine of its lucrative Princess line in its upcoming film "The Frog Princess," the company said at its annual meeting on Thursday.
ADVERTISEMENT

The film, scheduled for release in 2009 by Disney Feature Animation, also is the first hand-drawn film the company has committed to since pledging last month to return to the traditional animation form that made it a worldwide brand.

Disney did not provide details of the plot, but the company showed shareholders preliminary drawings from the film and had Newman and a local jazz band play a song from the film's score.

Maddy joins eight other Disney princess characters that have generated $3 billion in global retail sales since 1999. Disney Princesses is the fastest growing brand for the company's Consumer Products division.

Disney introduced its first non-white animated heroine in its 1992 film, "Aladdin" with the Middle Eastern character Jasmine, and followed it three years later with the Native American princess "Pocahontas."

The creation of the Chinese heroine from "Mulan" came in 1998. Other Disney princesses include the main characters from the films "Cinderella," "Sleeping Beauty," "Snow White and the Seven Dwarfs," "Beauty and the Beast," and "The Little Mermaid."

The Consumer Products division aggregated the eight characters in 1999 under the banner "Disney Princesses" and has rolled out toys, books, clothing, furniture and other merchandise aimed at girls ages 3 to 8.

Disney Chief Executive Robert Iger said the company wanted to show its support for New Orleans, only partially rebuilt 18 months after it was flooded by Hurricane Katrina, by holding its annual meeting and setting its newest animated film here.

"We thought it would be a great signal to send that New Orleans is important, that we believe in New Orleans, and in a way it was our means of not only expressing some appreciation but of giving back," Iger told Reuters in an interview. "This is a town we have derived great stories from." 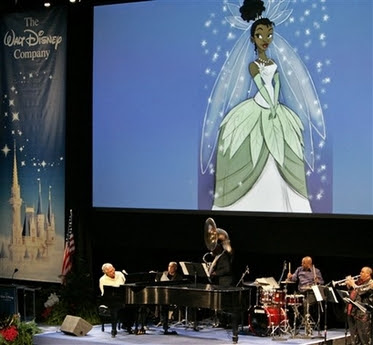 darkness is spreadin' baby!
Posted by Dirty Dre at 1:52 AM

REALLY cool news, hadn't seen that. Hurry up and graduate so's you can work on it!!!

man thats crazy, back to classical and suport for New Orleans, good stuff, looking forward to seeing it in 09 haha

That's awesome, but how about an Asian princess!

And no, Mulan doesn't count because she's not a princess!

Yeh I just blogged about this over at Highbrid Nation, check it out if you get a chance. Anyway, it really is about time Disney gave little girls a black princess to look up to. Its long overdue. I also think its great that the film will take place in New Orleans. I'll definately have to take my neice to the Frog Princess.

About time they had a black princess.. It's nice that Disney is returning to 2D as well.

Diiisneeey. The character design is not really my thing but I enjoy the concept :)